A lawsuit was filed in 2014 by rapper Flame (Marcus Gray) in US District Court of California who alleged that 2013 hit “Dark Horses” from Katy Perry (Katheryn Hudson) tread on his own 2009 work titled “Joyful Noise” and took his underlying beat in particular.

To demonstrate access to his song, Gray pointed its success in a niche market and the fact that defendants may have heard it at the Grammy Awards or seen it on YouTube or MySpace, where the song was played millions of times.

The defendants also attempted to knock the plaintiff’s ownership of infringing material by pointing to how the beat was allegedly preexisting material. Finally, Perry and Luke called experts to the witness stand in an effort to show a lack of any substantial similarity of protected expression.

The trial had unexpected moments, from Perry offering to perform her hit live amid difficulties with the courtroom sound system, to a shooting that took place just outside the courthouse on the day Dr. Luke testified.

During the trial, external musicologists were brought to the stand to testify.

On one hand, Todd Decker, professor and chair of music at Washington University in St. Louis, concluded that “Dark Horse” had borrowed the underlying beat of “Joyful Noise” and claimed that repeating sequences of musical figures in the beats of both songs shared “five or six points of similarity”.

On the other hand, Lawrence Ferrara, musicologist and professor at New York University, argued that “Dark Horse” and “Joyful Noise” shared similar instrumental sequences to older songs like “Jolly Old St. Nicholas” and “Merrily We Roll Along”.

Most copyright cases either settle or are dismissed before ever getting to trial, but “Dark Horse” joined “Blurred Lines” and “Stairway to Heaven” as songcraft that’s been put to a jury this decade. Jurors began deliberating after closing arguments Thursday, and returned their decision Monday afternoon.

Outcome:
California jury concluded on July 29, 2019, that “Dark Horse” is a copyright infringement after a weeklong trial. After this verdict, the pop star, her collaborators and label have been ordered to pay $2.78 million in damages by U.S. District Judge Christina Snyder on August 5, 2019.

A statement was issued by Christine Lapera, Perry’s attorney on behalf of

“The writers of Dark Horse view the verdicts as a travesty of justice,” the statement reads. “There is no infringement. There was no access of substantial similarity. The only thing in common is unprotectable expression — evenly spaced “C and “B” notes — repeated. People including musicologists from all over are expressing their dismay over this.

“We will continue to fight at all appropriate levels to rectify the injustice,” the statement concludes, presumably meaning that, as expected, an appeal is in the offing.

Listen to both songs and make your opinion: 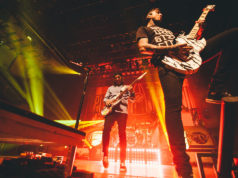 Radiohead At KeyArena In Seattle